Making end-of-life decisions is never an easy task. However, solidifying your wants and needs now will ensure they’re carried out after you’ve passed. Choosing to preplan funeral arrangements has become an increasingly popular decision as people realize the financial benefits and ease at which this can be done. In fact, planning green burials is a growing movement that is beginning to replace more traditional funeral services as a result of their ethical and philosophical aspects.

If you’re considering arranging a green funeral for yourself or a loved one, here’s what you should know:

What is an eco-friendly funeral?
An eco-friendly funeral generally refers to an end-of-life ritual that causes little harm to the environment, such as a burial in a “natural” cemetery. This means that the deceased are buried in a manner that allows the body to decompose naturally with the earth.

Cremations are another alternative to traditional burials that many people are turning to as they plan their funerals. Most burials take up precious land space and require chemicals to preserve the body. Standard caskets can have harmful effects on the land they’re buried in as well. These effects do not apply to direct cremations, where the body is taken to be cremated after death. This is why direct cremation is an increasingly favorable option among those who are concerned about the environment. 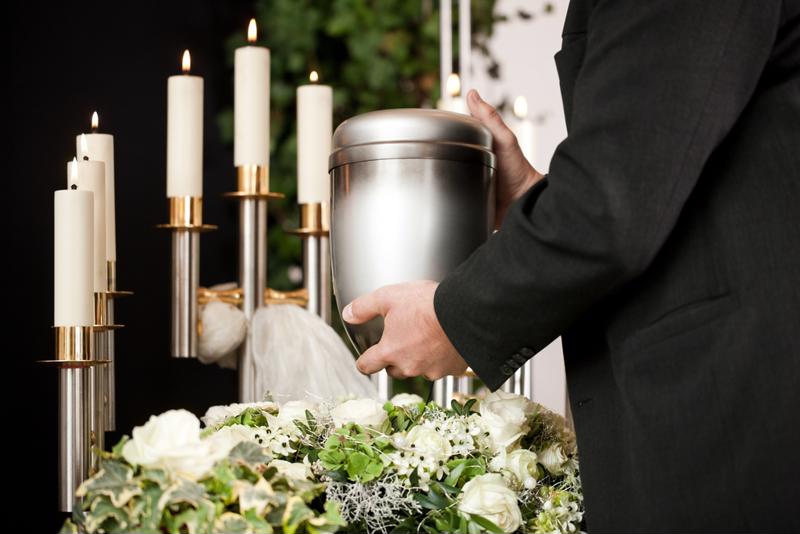 It’s possible to hold a funeral service after cremation.

A 2007 AARP national research report showed that 21 percent of Americans aged 50 or over would prefer an eco-friendly end-of-life ritual. As people have become more conscious over the years of their impact on the environment, this number has consistently risen. The Funeral and Memorial Information Council conducted a similar survey in 2010, showing that 43 percent of respondents wanted a green funeral. When the same survey was given in 2015, the results jumped to 64 percent.

In addition to the general population’s interest in reducing their carbon footprint, this increase is thought to be the result of lower costs compared to traditional burials, especially when cremation is chosen.

Why cremation is eco-friendly?
It may not seem like cremation could be considered one of the greenest end-of-life ritual options, as burning usually emits pollutants into the air, but many modern crematoriums have made significant reductions in emissions. Cremation also uses far fewer resources than most other disposition options. For example, many people prefer their ashes to be scattered, eliminating the need for a casket or space in the ground. Selecting direct cremation can avoid the embalming process, which uses harmful chemicals that impact the environment. If you want your ashes to be placed in an urn, you can find products that are made from natural materials like Himalayan rock salt that break down in water or earth.

“Instead of using a headstone or marble mausoleum, consider a green alternative.”

Many people prefer to have a specific place to go to mourn the loss of their loved one. Instead of using a headstone or marble mausoleum, consider a green alternative, such as a natural or living marker. For example, it’s common to plant a tree or grow a plant in memory of the deceased, especially in the area where his or her ashes were scattered. The Neptune Society provides families with the eco-friendly option of interring ashes at the Neptune Memorial Reef off the coast of Miami, Florida. Not only is this a special way to memorialize a loved one, but reports have shown that the reef has actually improved the marine life that surrounds it.

The most important factor for arranging a green funeral is preparing all of the details ahead of time to ensure your family knows exactly how to give you the eco-friendly funeral you desire. Neptune Society wants to ensure you have complete control of your end-of-life ritual with options like prepaid direct cremation services. Take all of the financial strain out of green funeral planning and know that your wishes are in good hands by prepaying for your cremation today.

Everything was clear and Sheri was very helpful when making... Read More

Everything was clear and Sheri was very helpful when making my decision.

Michelle Paxton Wilson was wonderful. If it wasn't for her,... Read More

Michelle Paxton Wilson was wonderful. If it wasn’t for her, I don’t think we would have done it. Now I am so glad we did for peace of mind. Michelle took the time to explain everything to us. Because she is such a warm and caring person, it made the experience enjoyable. One less thing for our families to worry about when we are gone.

When my husband passed away I wasn't prepared and the... Read More

When my husband passed away I wasn’t prepared and the Neptune Society was very helpful in making arrangements. Sarah was kind and empathetic and very professional. Everything went beautifully.

Empathic, professional, and prompt attention. Much easier and quicker than... Read More

Empathic, professional, and prompt attention. Much easier and quicker than I thought the experience would be.

Wonderful service during such a sad time. Bill Rafferty really helped my family through the cremation process. I really appreciate everything!

My experience with Mercedes and the Neptune Society was wonderful!... Read More

My experience with Mercedes and the Neptune Society was wonderful! They made this difficult situation totally seamless and took a huge burden off my shoulders. I can’t tell them enough how much I appreciate all they do and have done for me.

We have been very appreciative to our contact, Christina Stanley... Read More

We have been very appreciative to our contact, Christina Stanley at the Neptune Society.  Our father had made his arrangements, prior to his death, and it was all handled so efficiently and professionally, that when his wife unexpectedly passed away, 4 months later, we contacted them again. Christina was compassionate and expedient in all our interactions. at a very difficult time.  We are forever grateful she was there to guide us through the process and understood the complications of being out of state.

How to Plan a Virtual Funeral Service

Due to the global pandemic, people worldwide have had to cancel, reschedule and alter major life events to help prevent the spread of COVID-19. In addition to limits on social gatherings, the pandemic has increased travel restrictions for air and bus travel, making it difficult for friends and family to travel for funerals. In response